Nicaragua will gradually be better known as a surfing destination in the world with amazing surf spots to make a surftrip, although there is still something away if we compare it with Costa Rica or Mexico. What really makes the conditions of Nicaragua of the best in Central America, is that they have an average of 300 days a year of offshore winds due to its proximity to the Lake of Nicaragua.

It is one of the beaches to get started, since it has many surf schools, but also for experienced surfers, since its waves tend to have a large size. As in almost all Nicaragua, offshore wind generally favours conditions that we find in this beach, which also has as much as waves of left and right with a good period.

It is relatively easy to access it a 10-minute drive by dirt roads from San Juan South. 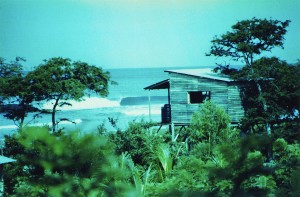 This beach has good two peaks: the reef inside and outside.

The left wave that forms in front of the river mouth beach colorado makes one of the most coveted surf spots in Nicaragua. Waves can be from the waist up to 3-4 meters high. This river mouth is located inside the Hacienda Iguana development in Tola Nicaragua’s coast, it is expensive to stay at this development.

Like Colorado, Panga Drops is located within the Hacienda Iguana development, on the coast of Nicaragua Tola. The peak of the wave is accessible by boat from San Juan del Sur or the beach if they stayed. It is also possible to hire a fisherman to take you from Playa Gigante, just north of Playa Colorado.

This wave is difficult to access and therefore requires hiring a boat from Playa Gigante or Shipyard, but it is possible to hike in Shipyard. Works great with big waves, when the rest of the wave beaches this outdated this is usually a good choice.

By having access is often difficult with so few surfers is one of Nicaragua places where we can surf calmer.

This is a very wide beach with plenty of peaks to choose Aseradores located in a small village beyond Chinandega, where you will not find many other tourists besides surfers.
Being north of Lake Managua, the wind is offshore all day, mornings only. It’s a pretty secluded and quiet area so if you’re with a partner is advisable to bring some books to distract spend time in a hammock.

The best time for surfing in Nicaragua is May to early December, when swells more south Pacific coast of Nicaragua strike.

Quality of life in Nicaragua

How to get / Airports Nicaragua

Airlines operating in Nicaragua are: American Airlines, Continental Airlines, Delta Airlines, Copa Airlines, Taca Group, Aerocaribbean and Atlantic Airlines.
Most flights arrive in the capital city of Managua. From there it is about a three hour drive to any surf camp. Best Fares tickets for domestic flights in Central America’s TACA airlines. They have the best times and the best board policies. The rate for out the board boardbag is $ 50, with a limit of 1 boardbag with 2 boards per person.